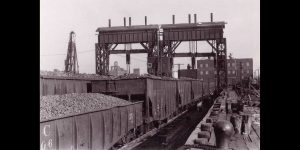 Before the Hell Gate Bridge opened in 1917, New York’s topography, which gave it extraordinary water access, also made Long Island (including Queens and Brooklyn) inaccessible to the national rail grid.

Join Bob Singleton for the story of Long Island City’s gantries with lift bridges, which accepted cargo-laden rail cars that were shuttled around New York’s harbor and waterways on car floats, and knit the harbor’s rail network together.