“I once loved a girl” – a Dylan lyric 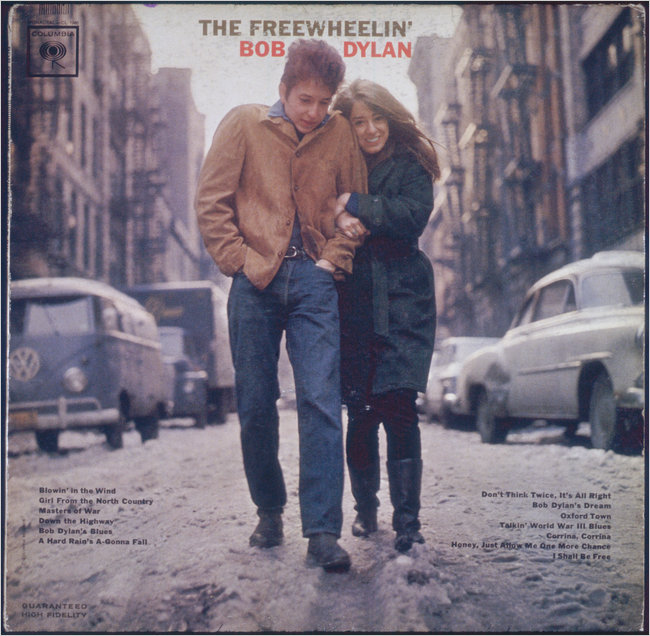 It was an iconic image – a musician walks through slush and fading winter light down Jones Street towards West Fourth  in the Village with a pretty girl at his side. Upstairs his $60 a month apartment has a few pieces of second hand furniture, on his back, a coat too thin for the cold, on his arm his first great love. At the corner a Volkswagen bus.

This image, from the cover of ‘The Freewheelin’ Bob Dylan,’ was an iconic moment from 1963, the year that launched an iconoclastic age. More than five decades have passed. There is scarce a person, who is young and brimming with excitement, who is ready to explore the future at their feet, and who does not see themselves reflected in that couple.

Wikipedia states the facts: Susan Elizabeth Rotolo was Dylan’s girlfriend from 1961 to 1964. Her parents, members of the American Communist Party, moved from Brooklyn to Sunnyside. In June, 1960, she graduated from Bryant High School in Astoria. About the time she met Dylan, she was working as a political activist in the office of the Congress of Racial Equality (CORE)

Describing their meeting in his memoir, ‘Chronicles, Volume One’, Dylan wrote: “Right from the start I couldn’t take my eyes off her. We started talking and my head started to spin. Cupid’s arrow had whistled past my ears before, but this time it hit me in the heart and the weight of it dragged me overboard… she had a smile that could light up a street full of people and was extremely lively, had a kind of voluptuousness—a Rodin sculpture come to life.”

Columnist Nat Hentoff wrote that “at the time of this album’s release, Dylan is growing at a swift, experience-hungry rate.” Dylan later acknowledged Suze’s strong influence on his music and art during that period. Elizabeth Mitchell, of the New York Daily News, reveals that it was Suze who played a vital role in developing Dylan’s career, and the seeds it sowed leading to its ultimate destruction. “It was not until they met,” states Ms. Mitchell, “that Dylan’s writing began to address issues such as the civil rights movement and the threat of nuclear war.”

Decades later Ms. Rotolo disclosed that “Bob was charismatic: he was a beacon, a lighthouse, he was also a black hole. He required committed backup and protection I was unable to provide consistently, probably because I needed them myself. … I was unable to find solid ground. I was on quicksand and very vulnerable.”

After living together for several years, they started to drift apart. Shortly after moving into her sister’s apartment on Avenue B, Suze discovered she was pregnant with Dylan’s first child. She and Dylan agreed to abort the child, an operation that was performed at a time when such procedures were illegal.

Ms. Mitchell writes that “the building where Dylan once lived for $60 a month was sold in 2015 for $6 million. The [album] cover image has vanished as the original photo negative disappeared from the Columbia files. And what of the eyewitnesses to that February day? Suze Rotolo died of lung cancer in 2011. Photographer Don Hunstein died in March, 2017 after suffering from Alzheimer’s disease.

And Dylan? He’s not talking.”

Wikipedia:Non-free content criteria. Image may be subject to copyright.