The Woman Who Loved Words 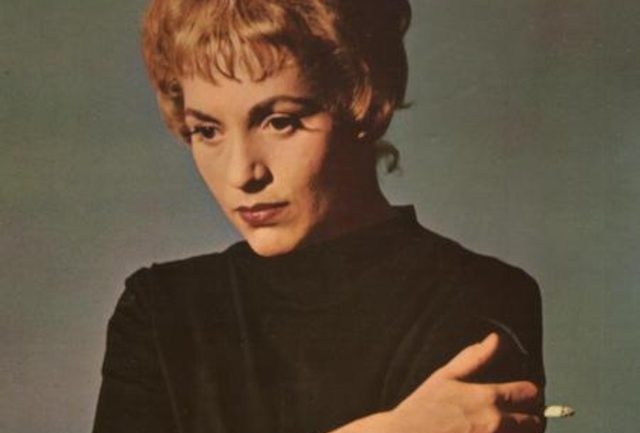 On March 21, 1951, Fed Astaire hosted the 23rd Academy Awards at the legendary RKO Pantages Theatre before an audience of Hollywood legends. Nominees for ‘Best Actress’ included Gloria Swanson, {Sunset Boulevard), as well as Anne Baxter and Bette Davis (All About Eve).The award went to Judy Holladay for her performance as Billie Dawn in Born Yesterday. The New York Times called her performance “not only funny but also human and moving.”  She was raised in Sunnyside Gardens.

She was born in 1921 literally into show business – her mother, a piano teacher, went into labor while at a play. Throughout her life people close to her were notable in the arts. Father, Abe, was the president of the American Federation of Musicians. Husband, David Oppenheim, was dean of the NYU Tisch School of the Arts and son Jonathan is today a noted film editor.

Her first job was in Orson Welles’ Mercury Theater as a switchboard operator. She worked in a Greenwich Village troupe with Leonard Bernstein, Betty Comden, and Adolph Green. After a brief stint in Hollywood at Fox Studios, where she stood up to mogul Darryl F. Zanuck’s aggressive sexual overtures, the tough New Yorker returned home to Broadway. As was customary at the time, she ditched her birth name, Yamin Tuvim, in favor of Judy Holliday for a stage name. Holy Days were one of the Hebrew meanings of Tuvim.

In 1945 her first Broadway role, Kiss Them for Me, won her the Clarence Derwent Award for best supporting actress. The musical Bells are Ringing earned her the New York Drama Desk Award and the Tony Award (chosen over Ethel Merman and Julie Andrews). The exceptional performance of the young actress in the stage version of Adam’s Rib (1949), prompted director George Cukor, as well as stars Katherine Hepburn and Spencer Tracey, to convince producer Harry Cohn of Holliday’s marketability for the film version.

Critics state that Holliday’s acting career was “brief but impressive.  Her canon is relatively small, including five Broadway shows.” Among Broadway performers she remains a legend: “I knew people who knew her and had only praise for her as a talent and person, as well,” states Broadway star Donna McKechnie (A Chorus Line). That impression is echoed by producer Gene Kirkwood (Rocky) who is making a movie of Ms. Holliday entitled Smart Blonde: “Judy Holiday’s story is for the ages and yet so relatable within the context of today.”

Yet, despite this success her career stalled. Signing some leftist petitions when she was young (her parents were Socialists) prompted a Congressional committee to summon her to Washington for questioning. Afterwards, despite an IQ of 172, and equally adept at comedy and drama, she was all but typecast as a squeaky-voiced ‘dumb blonde.’  Her career stagnated.

She tried singing. She considered getting behind the camera and writing scripts. Her frustration was evident when she stated: “I’ve always loved words. I ate up all the books I could get my hands on, and when I couldn’t get books, I read candy wrappers and labels on cereal and toothpaste boxes.”

The stress perhaps contributed to a diagnosis of cancer in her late 30s. Her last public performance, in 1965, was near her roots where she started, at a café in the Village. One of the songs she sang that evening was ‘The Party’s Over.’ A week later, at 43, she was dead.